We needed a vacation. So, Handsome and I jetted up to Canada for ten days. Let me explain what vacation means to him. Handsome doesn’t idle well. He wakes up at five and works ten-hour days when he’s not on call at the hospital. He likes to keep the same pace on vacation. Seriously. Time is money. As a physician and small-business owner, he doesn’t earn a salary. He earns income through surgeries and clinic visits, so he wants to maximize vacation time to justify the income loss. Thus, each day is scheduled to minimize down time to eight hours of sleep.

I embraced Handsome’s vacation goals with energy, research, and vigorous planning. And maps, lots of maps. In 2017 Canada celebrates its 150th year as a nation. The celebrating lasts all year. We enjoyed ten days in New Brunswick, Nova Scotia, and Prince Edward Island.

My tightly-scheduled vacation agenda unraveled after the connecting flight to Halifax canceled, stranding us overnight in Montreal, Canada. Granted, there are worse places to be stranded.

Handsome was once left for hours outside at the airport in Sierra Leone, Africa the day after the peace treaty was signed. Remember the movie Blood Diamonds? Yeah, that place. He was there on a medical mission with Mercy Ships to repair fractures and the signature traumatic amputations of their war.

So whining about being stranded overnight in Montreal felt silly. Storms caused a power failure on the eastern seaboard that disabled air traffic control and telecommunications with Nova Scotia. 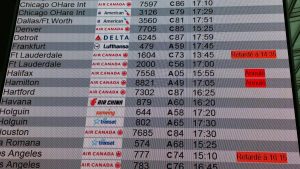 We claimed our bags and called the 888 number to grab seats on the 6 p.m. flight the next day. Handsome wanted to get standby on any earlier flights to Halifax, so we trudged back upstairs to join a grumbling mob in line to rebook. In total, three flights to Halifax canceled that day. I was okay with the cancellations because I wanted air traffic control to have electricity when my flight arrived.

The Air Canada staff huddled near baggage check-in. They broke into groups. One group set up a series of posts and ribbons to corral the mob. Another group rolled out a cart of drinks and snacks to appease the mob while three lone workers manned the ticketing booths. Handsome ate a KitKat. Rumors rolled up the line that Air Canada would switch out a smaller commuter plane with a larger jet to accommodate the three flights of stranded travelers. A family with two children in line ahead of us said they were on their way to a wedding. We commiserated over bottled water.

In time, we tired of the line and checked in at the airport Marriott. There at the front desk stood a man identified on his name tag as Ming. He greeted us in French, then English. We told him our tale of woe. He then called the Halifax Marriott and somehow got the prepaid, nonrefundable reservation refunded without penalty and checked us into a room with a king bed on the 7th floor. If not for the counter, I would have hugged Mr. Ming.

The large room had an ultra-bare minimalist style. Dark wood, sleek lines, simple lights. The carpet, walls, and artwork created a Zen-monk vibe with shades of gray and black in muted patterns. The shower had one frosted glass wall separating it from the bedroom. The bathroom, oh, the bathroom. It featured a seven-foot long, two-foot deep counter interrupted only by the lovely sink. The counter space had to have been designed by a woman tired of trying to balance her toiletries and makeup on the back of a toilet. Handsome and I would not be elbowing each other to get ready in the morning. 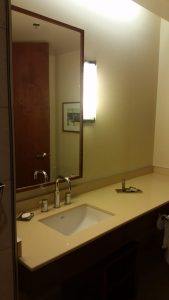 Because we will arrive a day late in Halifax, Handsome called the rental car company to let them know. After a moment, he laughed. It wasn’t the kind of laugh over a good joke. It was his you-have-to-be-kidding-me laugh. Then he said, “so you’re going to charge me more for using the car one less day?”

After a pause, he held his phone to his thigh. “Because we’re starting our rental on a Saturday, the rate is higher.”

“Tell them we are keeping the reservation as is. We’ll just pick up the keys tomorrow.”

Handsome smiled and raised the phone to his face. “Forget I made this call. Keep our reservation as it is. We’ll be there tomorrow to pick up the car. No. No. Don’t change it. Leave it as is or let me speak to your supervisor…uh, huh. Great. See you tomorrow.” 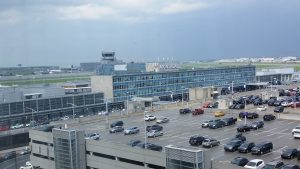 Our view from the wall-size window overlooked the 60s-style airport, tower, parking garage, and in the distance a church on a hill. It was a sign.

We ate, reviewed my carefully-planned agenda, and adjusted accordingly. The shower blasted away stress. The bed embraced us in comfort. We fell asleep knowing that we had seats on the next day’s evening flight. We prayed for power to be restored and for the weather to calm down.