On Monday, August 7th, the fourth day of our vacation in Canada, we hit the road early. The plan was to visit three areas along the central northern coast of Prince Edward Island. We drove to the Cavendish and North Rustico area to see the Green Gables House. There we toured the house and took a short hike through the nearby woods on a trail called Lover’s Lane. Along the walk were placards showing photos of L.M. Montgomery at various ages alongside quotes from her about writing and her love of the woods. A barn, other out buildings, and the requisite gift shop were reconstructed to match the period. Tourists took turns taking their photos in a buggy. 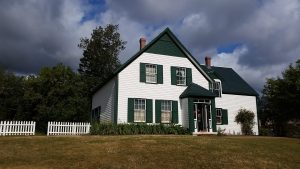 The home that inspired Lucy Maud Montgomery to write her stories.

I suspect this place was brutally cold in winter.

I bought a set of Montgomery’s novels for my granddaughter. After she reads them, we’ll rent the movies. 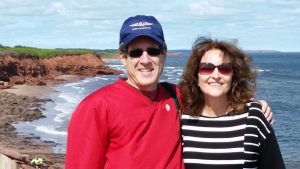 We stop at Cavendish Beach to see the red cliffs. 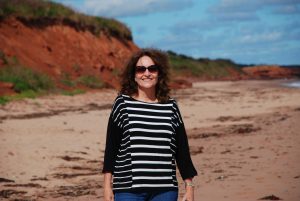 On the way to our next destination, we visited Cavendish Beach. The Red Cliffs area featured rocky beaches and eroded red stone cliffs. 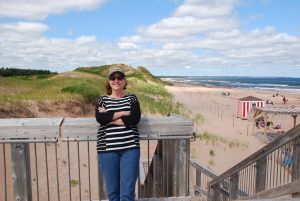 At Brackley Beach, the Canadians were getting tans.

Next, we returned to the Brackley Beach and Dalvay area to hike on low dunes along the seashore. Many families rode bicycles. After the hike on Brackley Beach, we drove toward the Greenwich area, stopping at St. Peter’s. We ate at Rick’s Restaurant out on the deck. Handsome, on a dare from a pal, ordered mussels and ate them. I tried one. I like lobster, shrimp, and scallops 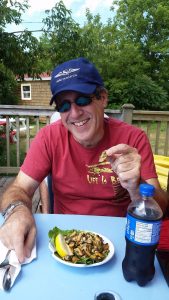 more. The chewy texture and gray appearance didn’t appeal to me. I ate fish and chips.

The Greenwich Interpretive Center provided information about the history of the indigenous Indians or First Nation known as the Mi’kmaq. The Indians helped the Scottish and French settlers 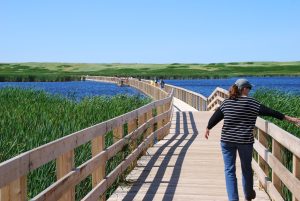 We hiked through a marsh to dunes on the beach at Greenwich.

adapt to their new environment. The Canadians, apparently, were far smarter than the American settlers in how they treated natives.

We continued to another parking area for the 2-mile round trip hike across an open plain, through a small wooded area, over a floating walkway on the marsh, to the large beach dunes. I’d read that in celebration of Canada’s 150th year as a nation, the park services had placed red Adirondack chairs at prime viewing sites. I had heard there were two such chairs at the end of this hike. A 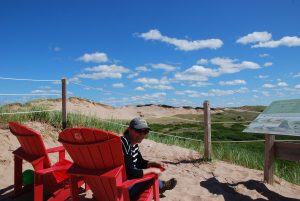 At the beach, I turned left and hiked to a dune with a marked trail. Atop the dune, I saw the red chairs. A kind couple from Toronto took my photo. Thirsty and in need of a bathroom, I fast-walked back to the parking area. Two isolated blue portables were worth braving for relief.

By late afternoon, we drove to Charlottetown and wandered through the historic area. We saw Dunston’s Basilica, a theater, trendy shops, and a block of cafés and pubs. We drove back to Dalvay by the Sea for dinner and a gorgeous full moon. That night, I had the choice of washing my face in hot or cold water. I chose cold and went to sleep with my face tingling. 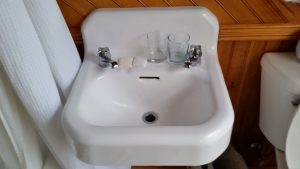 Zero counter space and either hot or cold water.

We faced a ferry ride and a long drive the next day to Cape Breton Island.