I love it when editors call. Some editors call because they want a woman’s perspective on my hobby—aviation. Only six percent of pilots are women, so I’m kind of a novelty. Some editors call for reprints on essays or articles that made them laugh. Some editors call because they want an article on a topic a staffer doesn’t have time to write. In 2003 a call came from an editor representing a magazine that I’d never written for, nor queried. He explained that he was preparing the special annual edition of WaterFlying magazine for the spring and would I consider writing an article on Jack Brown’s Seaplane Base in Winter Haven, Florida? The edition would feature seaplane bases and schools around the world. Okay, so this editor called because he needed a writer in Winter Haven. When asked how he learned about me, he said he’d picked up my business card from a writing colleague who could not accept the assignment. Okay, so I’m the SECOND choice, but not too proud to accept a hand-me-down. He offered $500. 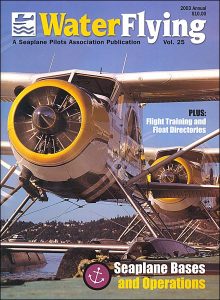 I knew the place well enough to avoid the second pot of coffee of the day. I knew the people, like the Japanese pilots who gathered on the back porch to photograph alligators, and the instructor Rennie who wrote THE book on seaplane training. The owner, Jon Brown, lived on my block. I knew the myths and legends and history of the base that was, coincidentally, celebrating its 40th year of operation. Familiar and newsworthy, this place taught stick and rudder flying in cloth-covered, slow-moving aircraft. This place humbled Air Force fighter pilots and thrilled private pilots. Brown’s Seaplane Base sat on the lakeside edge of the Winter Haven airport. It was where I learned to fly. As one of the few, the cheap and the brave who learned to fly a land plane at a seaplane base, this story felt like mine to tell. The editor didn’t care that I had never taken a lesson in a seaplane. He wanted me to capture the people and the place. Astronauts, celebrities and foreign pilots learned to fly seaplanes at Brown’s. Commander Kenneth Bowersox emailed from the International Space Station to his favorite instructor—at Brown’s. The fraternity of instructors at Brown’s connected seaplane pilots from around the globe and many dropped in for coffee and storytelling. Brown’s appeared in the credits of movies. On a trip to Alaska, my husband and I signed up for a seaplane ride over a glacier. The pilot had taught at Brown’s. Who could call such a fun assignment work? The gang gave an odd mix of reactions when interviewed since they knew me as a pilot and friend instead of as a writer. Somewhere between “spell my name right” and “is this on the record?” they shared their passion for the base. The instructors described the “Armstrong” starter on the J3-Cub as I dutifully jotted notes. It was only later when I saw them hand-prop the cub that I knew I’d been had. The dears. These are the same guys who tried to explain to me the tradition of cutting out the back of a shirt when someone solos. For women, they said straight-faced, they cut out the front. After the article appeared in WaterFlying magazine the gang at Brown’s gave me their sign of approval—they asked when the next article would be published. They, too, liked seeing their names in print (anywhere but the Post Office). I queried Pipers magazine because the seaplane base relied on Piper aircraft for 40 years of training. Pipers gladly bought the reprint. With guilty pleasure, I cashed the checks. 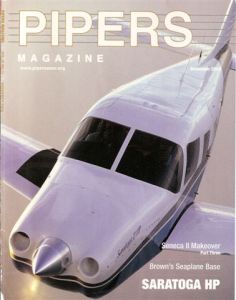 After these articles were published, hurricanes Charley, Frances and Jeanne all passed within fifteen miles of Brown’s Seaplane Base. Frances took off the roof. Frances is also the name of the owner’s wife. Do you think I’ll let this aviation news pass without reporting on it? I’ve done the background research, I have the clips to show about the base. Lemme see. Now which aviation magazine would pay the best for such a story? Call me shameless, call me published. Call me if you’re an editor. __________________________ Joni M. Fisher, author of South of Justice, is a writer and an instrument-rated private pilot who lives in Central Florida and North Carolina. She is a reporter for General Aviation News when she isn’t working on her Compass Crimes Series. See her website: www.jonimfisher.com.