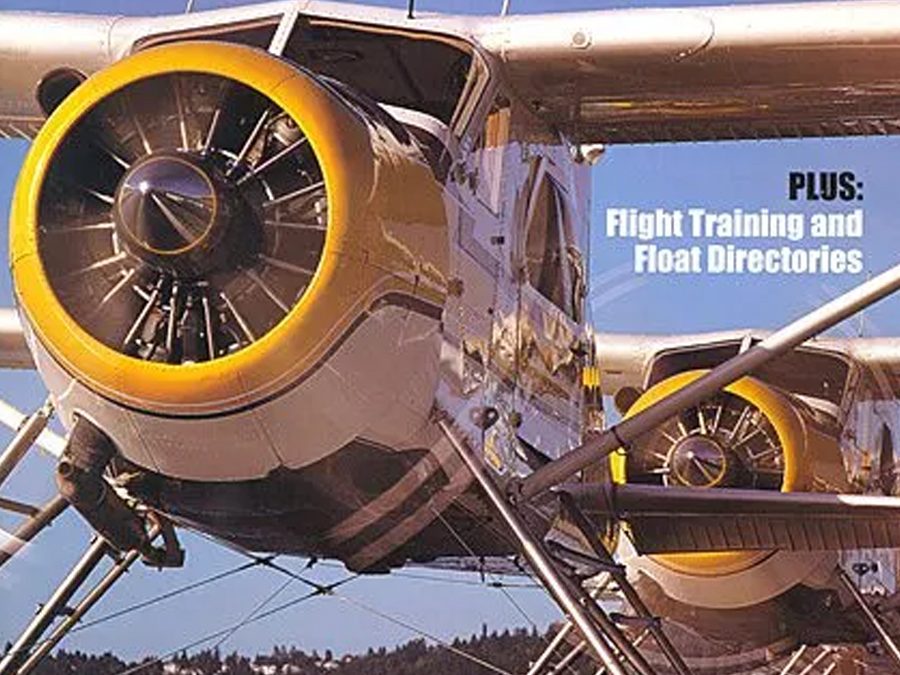 Jack Brown’s Seaplane Base continues to train more pilots in the fine art of flying seaplanes.

In 2003 Jack Brown’s Seaplane Base celebrated a milestone–40 years of continuous seaplane instruction. Brown’s Seaplane Base has trained more people to fly seaplanes than any other flight school in the world. How far does this school’s influence reach? Well, as Brown’s Seaplane Base entered 2003, its historic 40th year of business, its reach extended from Winter Haven, Florida into low-earth orbit. It seems that one of instructor Jim Torphy’s students, Commander Kenneth D. Bowersox, wanted to keep in touch during his 4-month stint in the International Space Station.

Jack Brown established the seaplane base 40 years ago and flew an estimated 24,000 hours in his beloved seaplanes. Jack died in 1975. He was ferrying a Seabee to North Carolina when he experienced a fatal loss of elevator control. Jack’s sons, Jon and Chuck, continue the family business. Unlike many seaplane flight schools, Brown’s has two examiners on staff. Chuck has 3500 hours SES and 3500 hours MES. Jon has over 9400 hours SES and 6250 hours MES. Representing the third generation of Browns on the base are Travis Gaines and Emily Brown. Travis has his private pilot’s license and does fabric work on the J-3 Cubs. Emily has recently begun her flight training.

The light brown FBO at Brown’s rises on stilts from Lake Jessie. Beside it on solid ground sits a huge hangar that serves as a maintenance garage when it isn’t being used to host a cookout or birthday party. The FBO is like a home in many ways with a front and back porch and a large screened-in porch with a kitchen. I was a student there in 1996 and remember meeting pilots from Alaska on their way to the Caribbean. They had landed on nearby Lake Arietta to refuel a Twin Otter. Jon brought a fuel truck to them. Like water birds migrating, they knew this place as a safe haven to rest and refuel with their kind.

Of course, it helps Brown’s popularity to be strategically situated in central Florida with over 100 freshwater lakes in a 5-mile radius. Practically in the geographic center of Florida, it serves as a hub of year-round seaplane training with the busiest season running from January to May. Pilots who plan to get their seaplane rating during the April EAA Sun ‘N Fun Fly-In sign up in November to reserve a training spot. In good weather, students can witness shuttle launches and clearly see the second-stage separation of the booster rockets.

In October 2000, the Orlando FSDO gave Brown’s an award for promoting the Seawings program in the United States. Obie S. Young, Safety Program Manager with the Orlando FSDO, said, “I know that every year Jon is somewhere around 50 percent of the Seawings issued compared to the rest of the country.” Young earned his seaplane rating from Jack Brown. He described the base as a family business conducted with southern hospitality. “It’s like walking back into history.”

Instructor Rennie flies a Hawker 800XP jet and a Citation Bravo jet for Darden Restaurants, yet he still teaches at Brown’s. Rennie said, “People say, ‘don’t go back’ because it’s never the same. But the thing about the seaplane base is it’s always the same. And it’s got the same stories and the same people and it’s wonderful. And the character of it is just the whole thing, it’s nice and laid back and it’s seat-of-the-pants flying again.” He refers to the instructors at Brown’s as a sort of fraternity. “Everybody is gung-ho and really enjoys what they’re doing and it’s not just a job.” His passion for seaplanes continues in his work on a new book to be called Step Up To Boats about flying boats.

Instructor Ron Trostle also mentioned the lifelong friendships of colleagues who have trained at Brown’s. Trostle said that they help each other find commercial jobs and at some time, they all migrate back to Brown’s, even if just to visit.

Students train for their Single-Engine Seaplane rating using three 85-horsepower J-3 Cubs on Aqua 1500 floats and for their Multi-engine Seaplane rating in a Nomad/Piper Aztec Pa-23-250 on Edo 4930 floats. Amphibious aircraft can land at Winter Haven’s Gilbert Field (GIF, 123.05) and back-taxi on runway 11 to Brown’s or land on Lake Jessie. For the landlubbers, Brown’s rents out a Cessna 150 and a fixed-gear Cessna 182.

Out on the water, students learn how to feel the crucial difference between the Center of Gravity and the Center of Buoyancy. They become familiar with a J-3 Cub floatplane from its sardonically named ‘armstrong’ hand-propped starter to the water rudders. They discover they can fly without an autopilot, GPS, storm scope, radio and even flaps. The training methods honed over 40 years at Brown’s have been condensed into an intensive short course. Weather permitting; a student can get the rating in a weekend.

The instructors produce amazing results in an efficient, professional, relaxed atmosphere. At the end of the day, pilots gather in the screened porch for coffee, camaraderie, and storytelling. Usually one can find a student and instructor reviewing the day’s splash-and-go practice, step-taxi procedures and safety tips.

Recent student Vinnie Pipitone is a commercial pilot and flight instructor from New Jersey. He said that flying a seaplane was as thrilling as “renting an exotic sports car to drive around.” The toughest part of the training was changing his thinking process. “A seaplane is not as responsive as a land plane. No brakes. You start the prop and you’re moving. You have to plan around moving objects in an environment with changing conditions.”

Instructor Rennie contrasted the secured landing environment for land planes against that of seaplanes. “On a lake, every landing you make you personally approve the landing strip. So you’ve got to be aware of where the wires are, where the trees are, how long the lake is, and not only that, it’s a very un-sterile environment. . . . you can have a 14-year-old driving a high-performance boat on the lake and he could pull right out in front of you.”

Rennie also lamented, “With a seaplane as long as you have boats and seaplanes together sooner or later a boat is going to make contact with a seaplane. And unfortunately, it’s a seaplane accident even if the seaplane had its engine turned off and a boat ran into it.”

In 40 years of training, there have been a few rare accidents. Jon and a student on a check ride had an emergency landing in Lake Arietta in Auburndale in 1979 when a strut broke loose. Their accident contributed to the Piper Service Bulletins No. 910A and No. 528D and the Airworthiness Directive 93-10-06 on rolled instead of cut fork bolts on Piper Struts. Performing thousands of hours of training naturally involves some risk. Like driving a car, Jon said, “Just backing down your driveway, if you do it thirty-thousand times at some point you may hit the mailbox.” In fact, one of his daughter’s dates did knock down his mailbox. Point taken.

Instructor Rennie said, “I’d say only about 13 to 15 percent of the people who get their seaplane ratings actually go and use them. It’s mainly a cocktail license, so to speak, that gives the pilot bragging rights . . . or it’s just to do something they’ve always wanted to do, but they’re not going to go out and buy a seaplane and actually fly seaplanes.”

Rennie said that a seaplane rating benefits pilots whether or not they ever fly another seaplane because in an engine failure, “if they had seaplane experience they can look at a lake and tell exactly where the wind is coming from, how strong it is, and so they pick a filed with a lot more information ahead of them.”

The reputation of Brown’s Seaplane Base led a special request from the Flying Physicians group. At their request, Jon and his instructors brought their entire operation to Lake-of-the-Ozarks for two weeks in 1992. Instructor Trostle remembered the effort of ferrying the planes from Florida to Arkansas. He had flown one of the J-3 Cubs while Jon flew the twin Comanche. “We got there before Jon,” Trostle said smiling. “We had the advantage of flying under the weather that he had to go around.”

The influence of Brown’s Seaplane Base reaches around the world. It is common to find students there from Japan, Sweden, France, Britain, and South America. Foreign students have been 40 percent of their business. Because the new required background checks for foreign students began in July 2002—after Brown’s busy season—the seaplane base has not yet felt the economic impact of the 9-11 terrorist attacks as other flight schools have.

“You mention seaplanes in Europe and it’s automatic that Brown’s enters the conversation,” said Irish pilot Margaret Jackson. “I came to Brown’s to get my seaplane rating and I liked it so much I sold everything in Europe and came to Florida.” Since Jackson’s 1997 move to Florida, she has flown 420 hours SES, bought a Cessna 180 on floats and bought the Lake Ida Beach Resort in Winter Haven. She loves the freedom of seaplanes as the last vestige of real bush flying.

Look for the yellow J-3 Cub yellow polo shirts with the “Jack Brown’s Seaplane Base’ logo. They tend to bob up in crowds at aviation gatherings like the Greenville Annual International Fly-In on Moosehead Lake in Maine. Brown’s Seaplane Base also appears in the credits of movies: “Brenda Starr”, “Nothing By Chance” and “Dark Tower.”

If you plan to go for flight training at Brown’s, go for that first fresh pot of coffee of the day on the screened porch. And even though the Japanese students consider the back porch the prime location for photographing alligators, the back porch gets scalding hot in the summer.

Despite their communications with astronauts in orbit, Brown’s Seaplane Base treats pilots to a bygone era of basic stick and rudder flying laced with Southern hospitality. Since this is the closest most pilots will ever get to the thrill of being a bush pilot, why not get a seaplane rating? We aren’t getting any younger.

Oh, and if you see Jon, ask him about posing for the September page of a 2002-2003 calendar. But that’s another story.

This article appeared in WaterFlying magazine in 2003. WaterFlying magazine covers topics of interest for the world-wide Seaplane Pilots Association. The seaplane base is still going strong. Jon Brown’s daughter Alison married Ben Shipps who teaches there. In 2019, Jon retired a