Then I Met You by Deborah Wilding

Winner of the Daphne du Maurier Award of Excellence, Then I Met You

by Deborah Wilding presents Hawaiian society just before the attack on Pearl Harbor through the eyes of twenty-two-year-old Merrylei Wentworth in a seamless blend of history and fiction. The Wentworth family built their fortune in shipping, dating back to the days of Hawaiian royalty. After Merrylei’s father dies, she returns to Honolulu to restore the family mansion with plans to open it as a guesthouse. The grand house suffers from vandalism, age, and general inattention.

When Nisei (second-generation American-Japanese) Jamison Sumida offers architectural plans to restore the mansion, Merrylei is cautious. In 1941 Hawaiian society is sharply divided into racial and financial classes that place Jamison and Merrylei in separate social circles. Jamison wins her trust when he demonstrates his deep appreciation for paintings, specifically works created by Merrylei’s mother. Merrylei crosses an unspoken social boundary when she hires Jamison to assist in the mansion restoration. 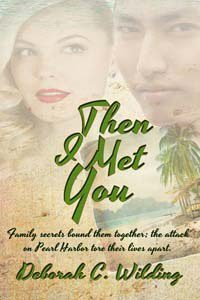 Then I Met You by Deborah Wilding

One of the first to object is businessman Jerry Caine who courts Merrylei. His charm and connections make him a very eligible bachelor. He is concerned for Merrylei’s safety alone at the mansion. Stolen royal jewels, curses, rumors of war, acts of vandalism, Japanese leasehold farmers who fear eviction, and the attack on Pearl Harbor threaten to prevent Merrylei from saving the family home.

As Merrylei comes of age–discovering her own strength–so does the nation at the outbreak of war.

In 2013 this story won the Daphne du Maurier Award for Excellence in the category of unpublished historical mystery/suspense under the title In a Sea of Change.