Having wrestled with scene cards, cork boards, Post-It Notes and other tools to organize a story, I found one that works for me. In the interest of full-disclosure, I am a plotter and a visual learner. Partly this storyboard concept comes from the four-act structure, part of it comes from my infatuation with crime investigation boards shown on television. (Please don’t say detectives don’t use these. I want to believe…)

Using an easel stand and the largest magnetic marker board that my husband will abide, I plot using 4 X 6 index cards–one scene summary per card. The card names the point-of-view character, the setting, the character’s goal,  motivation, and the conflict, ending with the character’s goal for the next scene. When plotting the story structure, I usually prepare the scenes in chronological order. Later, I arrange them in the order of telling to structure the story for greater impact and pacing. For example, rather than front load the story with events that happen in a character’s childhood, I move those scenes later in the story as flashback or backstory. 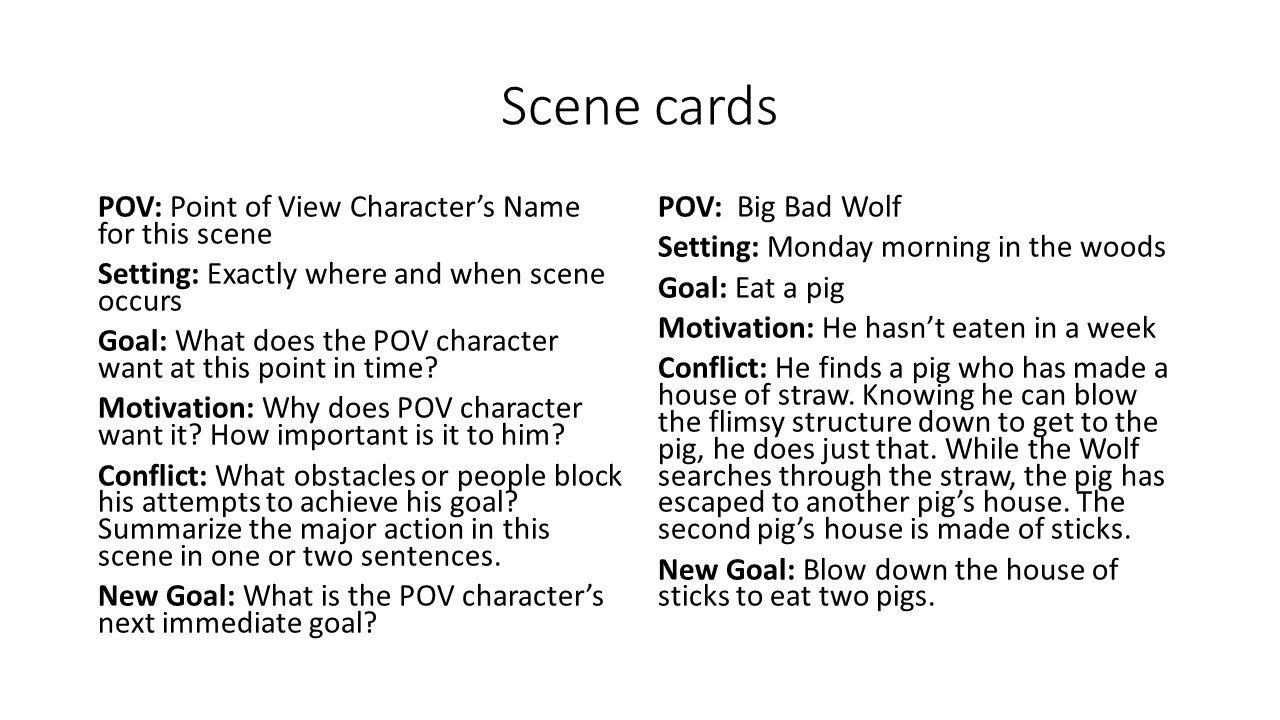 The template on the left describes what goes on the card. On the right is an example.

While writing the first draft, scenes combine into chapters. In a romance story one scene could be told from the woman’s point of view, and another from the man’s to create a chapter. Even if the action is simultaneous, they will appear as separate scenes, one following the other.

These scene cards stick magnetically on the story board along the timeline (a line drawn horizontally across the middle of the board). The scenes involving the antagonist appear above the timeline, protagonist’s below. This helps me track who is doing what and when. I watch for gaps in action, because neither the antagonist nor the protagonist should disappear from the story for too long. The protagonist’s scenes are linked by cause and effect or scene and sequel, like dominoes they follow a logical flow of action. Ditto for the antagonist. Using magnetically attached cards makes moving them easy. This encourages creativity.

To my colleagues who write by the seat of their pants–those freaks of mental agility who do all this in their heads–let’s agree that readers don’t care how we produce great stories. All the reader sees is the final result. To my colleagues who buy fancy plotting software, or stick Post-It Notes on walls, may you find a way to efficiently plot so you can spend more time writing and editing. For anyone interested, here is a PDF example: Plotting with storyboard Enjoy!