My husband, a physician, and pilot joined the Flying Physicians organization and so we flew to their annual meeting in New Orleans in 1998. When the editor of the Flying Physician magazine heard that I was a pilot he asked me to write about why so many wives refuse or resist flying with their husbands no matter how much their husbands want to share the cockpit. This article is my explanation of that phenomenon. 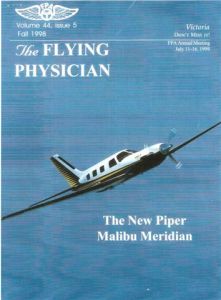 John had problems convincing his wife, Martha, that she could enjoy flying. Before her first flying lesson, Martha tried to climb back out of the plane. John and the instructor acted immediately and decisively. As John tells it, “We had a wrestling match and shoved her back in.”

“She went along with grim determination until her first solo cross country,” John explained. While John and the instructor paced on the ramp, Martha dodged storms and wound up coming back after dark. She marveled at the sunset from this new perspective and fell in love with flying. Today, John and Martha King own and operate King Schools of San Diego, California, where they teach flight training. They have become a poster couple of general aviation.

Because only 6 percent of pilots are women, most couples in general aviation don’t share a pilot-to-pilot relationship in the cockpit. The majority of women fly as passengers. The complaint “I can’t get my wife to fly with me” demonstrates a trend in general aviation that can be changed. We will explore a few of the factors working for and against flying couples.

Other than access to airplanes, the FUN FACTOR is a key element in attracting women into aviation. Jackie Cochran, the first woman to break the sound barrier, got her pilot’s license on a dare from her husband. Aerobatic champion Betty Skelton Frankman’s parents brought her to the FBO for their flying lessons. Patty Wagstaff’s father used to take her for rides in his plane, but she really got involved with aviation after her husband taught her a few aerobatic maneuvers.

The first woman to earn a pilot’s license, Harriet Quimby, entered aviation for the fun of it with her pal Matilde Moissant, whose husband offered flying lessons in New Orleans. (Yes, the Moissant after whom the airport is named.)

In their eagerness to get women to enjoy flying, some men have unintentionally driven women away from it. Veteran flight instructors cite one serious, common tactical error men make — let’s call it the

SEE HOW SAFE FLYING IS FACTOR

Using this tactic, a fellow convinces his wife or girlfriend to go for a ride so he can show off his new skills. In trying to make the ride fun, he demonstrates emergency procedures, slow flight, stalls, spins, rolls, steep turns and such. He means well, the poor dear, but this stuff scares the lunch out of most people. Granted, a few women love this kind of thing. The rest will display symptoms such as icy silence, fainting, screaming, threats and clawing at the windows. But who can blame them? Who would ever fly twice on ABC Airlines if one of their pilots demonstrated a stall during flight? Experienced professional pilots know that passengers enjoy and expect uneventful flights. Leave the thrill rides to theme parks.

I’M GOING TO HAVE FUN WITH OR WITHOUT YOU FACTOR

Another common unsuccessful tactic men employ is to simply leave the woman behind and go fly. The I’M GOING TO HAVE FUN WITH OR WITHOUT YOU FACTOR has one major flaw. It invites, begs and dares the one left behind to reciprocate in kind. This tactic also makes the airplane an object of scorn and jealousy.

Bullying, threats, nagging, harassing and frightening women won’t achieve positive long-term results. Of course, it’s more time-consuming to find out why she doesn’t want to fly and respectfully address that concern, but asking a man to do this would be like expecting him to ask for directions.

A woman may stay away from flying because of fear, motion sickness, apathy, or pursuit of other goals. Perhaps the “Mrs.” doesn’t eagerly accept a four-hour flight because she has a three-hour bladder. Is she adventurous enough to wear a Depends ® undergarment? Fun is a matter of perspective.

The HASSLE:FUN RATIO FACTOR often works against women more than it does for men. For a woman with young children, taking flying lessons poses a series of unique obstacles. Is a sitter available during the day? How much time is there to fly between the start and end of daycare or school? Can she juggle carpool duties to allow time for a cross-country flight? Who will help with the children’s homework while she studies for the written exam? Even if she thrives on flying, she will not continue if the hassle:fun ratio leans heavily toward hassle.

THE GUY DRIVES THE HARLEY FACTOR

Women who obtain their pilot’s license often face another obstacle that John King describes as “the biggest single failure of men — failing to relinquish power to women in the cockpit. They’ll try it a few times and the men absolutely, flat-out, totally, fail to relinquish any authority or power to the woman and, after all, she may as well be in the back seat because there’s nothing in it for her. That is as universal as the fact that the man always rides up front on a Harley. What happens is that even when the woman is flying she’s nothing more than a voice-activated autopilot and that is absolutely no fun.” Let’s call this THE GUY DRIVES THE HARLEY FACTOR. It is no coincidence the Harley-Davidson brand motorcycle is called a ‘hog’.

Couples who fly together find the greatest peace in the cockpit when they behave as the professionals do. The ground rules include acknowledging that the person in the left seat is genuinely the pilot in command (PIC). In an emergency only one person can fly the plane, so the ‘who’s driving’ issue must be settled before takeoff. Imagine what auto insurance rates would be if cars had dual controls. Settling the command issue means more than just saying the words; it means trusting the PIC.

For example, pilots Larry and Martha Walker of Winter Haven, Florida, have flown together for years, yet when Martha was recently PIC she remarked that the right brake didn’t work. As they taxied down the ramp, Larry insisted the brakes had just been fixed. Martha asked him to taxi back to the hangar. Larry ended up steering the plane off the taxiway into the grass, where he graciously apologized.

It all goes back to the question — Would a man treat another man this way? Which brings us to the

I’M ONLY TRYING TO HELP FACTOR

Even men with zero flight training have been known to offer advice from the right seat. How many men have ‘helped’ women fly by adjusting controls from the right seat? This can be wonderfully handy with the consent and knowledge of the PIC; without consent, however, the mysterious change of power, radio frequencies and such can be hazardous. If a man wouldn’t touch the controls when another man is in command, then he shouldn’t do so when a woman is in command. After all, cockpit fights are such poor form. They destroy morale among the passengers.

John King recommends professional cockpit resource management. “The co-pilot on a commercial airliner doesn’t fiddle with the throttle or adjust the gear without a command from the captain, they just don’t do that. Period. Ever. And you don’t make wild comments, as the co-pilot, in giving your opinion about this or that. All you can do is present facts. So you can say ‘sink is one thousand’ — that’s okay — ‘you’re too low and darn it you’re descending too fast’ is not correct because it’s an opinion.”

Dennis and Janeen Kochan, of Winter Haven, Florida, flew for separate carriers and are flight instructors. Janeen, a guest speaker at Lakeland’s Sun ‘N Fun Fly-In, observed that “the tone in the cockpit, when couples are flying together, reflects their total relationship.” She’s met men who nag their wives and girlfriends of pilots whose interest in aviation stopped on their wedding day. Change of altitude does not change the relationship. Let’s call this the

If the relationship stinks on the ground, it will stink in the air, too.

For some couples, the happiest arrangement may be for the man to fly left seat. A woman who doesn’t want to fly the plane might enjoy reading the checklist aloud, setting the transponder, learning how to operate the radios and writing down instructions from controllers during flight. For couples to develop a sound working relationship in the cockpit, they must communicate clearly and honestly to establish their own ground rules. Because men hold 94 percent of the airmen certificates, men predominantly influence the future of general aviation by inviting women to fly.

Here are a few suggestions for making flights more enjoyable for women. Allow a woman time to enjoy flying. Not everyone feels love at first sight. Some require courtship. Go the extra mile to make each flight a wonderful experience. This can mean waiting for good weather before taking up a skittish passenger. Start with brief flights and work up to long flights. Discover where she wants to go. Treat each other with the same courtesy you would use with royalty. Communicate clearly and respectfully. Never perform aerial stunts (slow flight, loops, rolls, spins, stalls) without the prior knowledge and eager consent of the passenger. The pilot in command is an earned title. Respect it.

And finally, be prepared to share PIC duties if she becomes as enthralled with flying as you are. It can happen.